Operation Trinity was written by Clifford Riley and was released on May 8, 2012.

This extraordinary novel cracks open the Cahill vault to tell the story of the most coveted piece of artwork in the world, a masterpiece that has been the target of seven separate theft attempts: Jan van Eyck’s altarpiece at Ghent. OPERATION TRINITY chronicles the first Vesper attack on the altarpiece in the 1600s, then jumps to WWII and young Grace Cahill’s desperate bid to save the masterwork from the Nazis. The final piece of the novel tells the story of Ian and Natalie Kabra’s first solo operation and features an 11th hour appearance by Grace Cahill on her final mission.

History will never be the same.

To be released on May 8, 2012, the Cahills have cracked open their vault to tell the story of the most coveted work of art in the world, a masterpiece that has been the target of a record seven theft attempts. Operation Trinity chronicles the very first attack on Van Eyck's altarpiece, then jumps to WWII and young Grace Cahill's desperate bid to save it from the Nazis. The final story tracks Ian and Natalie Kabra's first solo mission--and the searing betrayal that nearly costs them everything.

It follows the story of a boy named Matheus Jacobs. One day, on a seemingly peaceful day, a messenger from King Philip of France sent a letter. After reading it, his father and mother, Joost and Anna, went for a private talk with Matheus. They explained why they want him to become an altar boy: Jan Van Eyck's altarpiece needs to be protected from the Vespers, the rebellion on that time probably caused by them so they had a chance to steal it, and the only way to protect it is to stay close with the object by becoming an altar boy. So, Matheus set off to Ghent, to Saint Bavo Cathedral.

That night, after he arrives and tried to get sleep, he sneaks outside to see the altarpiece, and meets with Father Gerard. The next day, Father asks him to send a package for an errand. On his way, he meets with mobs, and goes back home to his parents, to see if they are safe. In reunion time, Matheus meets with a black-hooded man, who he saw from the crowd of mobs. He kills Anna, and escapes. Matheus rushes to Ghent to save the altarpiece before the Vespers take it. He works together with Father Gerard to hide the paintings in the bell tower, before the mobs could destroy it. The next morning, the riot is over. Matheus and Father Gerard return the altarpiece back. It seems that the Vespers want the altarpiece because it contains a map to something unimaginable--there are some Hebrew symbols that will give away the information if they are translated correctly.

It follows the story of Grace Cahill, after the events of taking Gideon's ring from George Patton on ongoing war. One day, she receives two letters, one is from her favorite teacher, Timothy Blythe, who joined the army. The letter talks about the altarpiece who have gone missing for years, and she has to locate it. At Miss Harper's School of Girls, there's a new teacher of art history, Mademoiselle Hubert. She teaches the girls, and gets a full attention to Grace. On a slide showing the altarpiece, the teacher snatches the letter from Mr. Blythe from Grace. Later, Grace sneaks into her office to retrieve it. She finds a letter from V-4 to Hubert, saying that they got the altarpiece and it seems Hubert replaced her old teacher, just to gain information of the altarpiece before killing her. There was a shootout, and Grace survives.

Then she goes to Paris, to meet Rosa Valland, the curator of the Louvre museum, by sneaking into a Navy boat. Rosa tells her that the altarpiece contains a secret, and it's now with the Nazis in Austria. She is asked to rescue the altarpiece before the Nazis destroy it. Jane Sperling takes Grace to Luftwaffe, German Air Force. From there, she works alone. She hides in a wagon that carried dynamites to a mine, possibly a place where the altarpiece is kept. She is right. After she got out of the wagon and into a cart to the mine, she finds the altarpiece. She decided to block the cave and wait for the Allies to come, and the plan works. She succeeds in saving the altarpiece.

Part 3 follows Ian and Natalie Kabra on a solo mission. In an auction house, Ian bids 16,400,000 pounds for the Self Portrait of Jan Van Eyck, and wins the auction. He later got picked up by Isabel on a helicopter. Isabel has a mission for them in Belgium, to take some files from the University of Ghent. They do, but they are caught. Ian realizes his mother forgot to send backup. However, he and Natalie track her down. The mission to retrieve the files at the University of Ghent is actually a diversion for Isabel to destroy the altarpiece. She is just about to destroy the altarpiece when Grace walks in and threatens them. Ian tells his mother not to, and she brings them out. On the way, Ian looks at Grace, who winks at him. Grace is left alone and begins to scan the altarpiece. She discovers important information, which is not revealed. "They will move the earth" is the message she scanned on the altarpiece. She takes a final look at it, then heads back to Massachusetts. 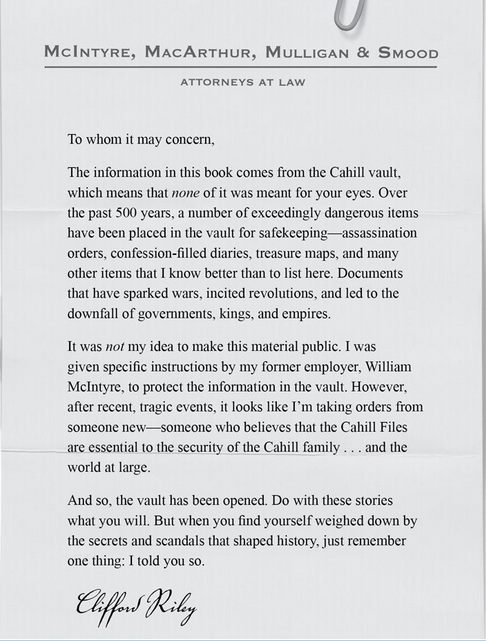 Retrieved from "https://39clues.fandom.com/wiki/The_Cahill_Files:_Operation_Trinity?oldid=120287"
Community content is available under CC-BY-SA unless otherwise noted.