The 39 Clues Wiki
Register
Don't have an account?
Sign In
Advertisement
in: Ekaterina characters, Nowhere to Run, Unstoppable

The Starlings are one of the teams in the hunt for the 39 Clues.

The Starlings are Cahill triplets that belong to the Ekaterina branch and are one of the nine teams who were hunting for the 39 Clues. Ned, Ted, and Sinead Starling are triplets. Sinead, who is attractive and has long red hair, was Vesper Three. In Nowhere to Run, there is a mention of a Denise Starling too. Debi Ann Peirce is also a Starling.

Ned, Ted, and Sinead Starling join the Clue Hunt as Team Four. While in Philadelphia, the Starling triplets are hit by a bomb set by the Holt Family at the Franklin Institute (but it was really meant for Amy and Dan Cahill). Ted is blinded and Ned has painful headaches. Sinead has scar tissue on her skin. They were knocked out and were out of the clue hunt for a period of time

The Starlings dress in Shakespearean clothes and cause the fight at the performance of Romeo and Juliet.

Ted is captured by the Vespers and Sinead is at the Command Center. Ned is the only one that escapes from the Vespers.

Ted is still captured by the Vespers and Sinead is at the Command Center.

Sinead is found out to be Vesper three by Evan.

Ted, using Morse code by blinking his eyes, tells that "RILEY MCGRATH IS VESPER ONE". Soon Ted along with the other hostages escapes and Sinead is no longer Vesper Three. She turned Cahill again. 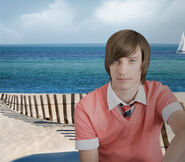 The Starling triplets are very good at inventing and creating new things. Ted is particularly good at drawing blueprints and planning. He invented a helicopter (said in Into the Gauntlet) that could land in places where the current helicopter cannot. Ned is good at coming up with fascinating equations in math and science. Sinead is good at creating gadgets and breaking codes.