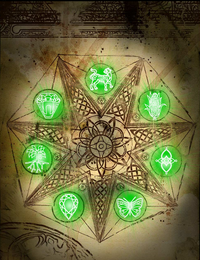 Troy : Six whiskers from an Anatolian leopard, ground to a powder. Amy and Dan found this in Nowhere to Run.

Carthage: Silphium, tincture one dram. This is found in Breakaway.

Tikal: Riven crystal, one dram ground to a powder. This is found in Countdown.

Angkor: Venom of a Tonlé Sap Water Snake, half jigger. This was found by Cara Pierce in Flashpoint, and given to Amy, Dan and the others by her.

Pueblo : One head of an ancient piece of corn. This ingredient is found in Unstoppable Mission 1: Written in Stone.

Retrieved from "https://39clues.fandom.com/wiki/Serum_Antidote?oldid=118371"
Community content is available under CC-BY-SA unless otherwise noted.