The 39 Clues Wiki
Register
Don't have an account?
Sign In
Advertisement
in: Holt Family, The Black Book of Buried Secrets, Females,
and 9 more

Reagan Terri Holt is a member of the Holt family. She is the daughter of Eisenhower Holt and Mary-Todd Holt, twin sister of Madison Holt and younger sister of Hamilton Holt. She is 11 like Dan in the first series and later becomes 13 in the second series.

Reagan wants to be a ballerina but is afraid to tell her siblings because "they won't stop laughing for a zillion years". She is part of the Tomas branch. She is very strong (like all Holts) and also loves to exercise. She also was apprehensive about doing things to hurt competitors early in the clue hunt, like burying Dan and Amy. Like her brother Hamilton, she often shows a softer side.

Madison is Reagan's twin sister. They are built like tanks (even though they dont look like it)

Reagan Holt is one of the Holt twins, and is shown to be the kindest out of her siblings and parents. Like the rest of her family, she is shown to be athletic and muscular, despite her being only 13. She is a brunette, unlike her twin, who is blonde. She is also described as having a crooked smile like her sister. Reagan and her brother and sister commonly wrestle throughout the series, or are described slugging each other. She wears a purple running suit both during the Clue Hunt and at Grace Cahill's funeral.

Reagan is athletic, involved in various sports, and tends to be overly aggressive towards her peers. At the same time, however, she is not as ruthless as her family, as her brother and sister often tease her about 'going soft.' She also has an affinity for ballet. She is the smartest and the most intelligent one in her family after Hamilton. In the first book, she

is the only one to protest against leaving the Cahills in the empty grave in Paris, France. She can be very mean but also very nice and very fair.

As Reagan is a Tomas, she has the basic skills of one:

Reagan is introduced at Grace's funeral when she and Madison hold Dan upside down and then drop him on his head. She and her family are invited to Grace's will reading, and when Mr. McIntyre informs the Cahills about their ancestors, she suggests Lewis and Clark as a likely Cahill. The Holts join the Clue Hunt, and Reagan and her siblings are shown fighting over ice cream in an ice cream truck in Paris. Reagan aids her family in monitoring the Lucian Base. Her siblings make fun of her for going soft.

At the graveyard in Paris, shortly after, she tries to convince her family to help the Cahills out of the grave trap prepared by the Lucians. She helps protect the Cahills from the Lucians before being knocked unconscious by Dan's concussive grenade. She hates Lucians.

Reagan is seen helping her family search the train for the Cahills. She has no lines.

She and her family find Amy and Dan in the library with Alistair Oh and take them as prisoners. She has a couple of lines in the beginning including when she wants to save Amy.

Reagan has a short appearance getting punched by her sister in in Volograd, Russia, taping a tracking beacon to the Cahill's scooter, and then after throwing meat pies at the Kabras.

She and the Holt Family were chasing Dan and Amy during surfing.

She and the whole family (except Madison and Mary-Todd) went to the top of Mt. Everest but her father is the only one who continued going up to the mountain.

She and the rest of her family except for Hamilton are tied up in the graveyard on Cahill Island, and is a hostage to Isabel Kabra.

Reagan is first shown swimming in Puerto Rico, training for the Ironman trialthlon world championships, when she spots a shark in the water. She sees a shark-proof cage attached to a boat with a scuba diver in it and swims towards the cage, getting in just in time. When she gets onto the boat, she tries to thank the people who rescued her, but sees a gun pointed to her head. The people on the boat turn out to be Vespers, who take her hostage.

In an attempt to break out, Reagan is seen to have fallen while doing pushups. When the rest of the hostages check on her, it is shown that she had "died", and the hostages grieve for her. When the Vespers come to take her out, she acts and takes down one of the Vespers. With a stolen gun, she helps her comrades escape, but stays back with Nellie to hold the Vespers back long enough for the hostages to get away. The hostages end up being recaptured and transported to another facility, with the absence of Phoenix.

She is escorted to the Rockies by the Vespers. She later escaped the Vespers and alongside the other hostages, Jonah, Evan, Ian, Phoenix, Amy, Dan, Jake and Atticus, destroys the Machina Fini Mundi. She appears at the end of the book practicing martial arts with Hamilton Holt.

It is mentioned by Ian that she is training for the Olympics along with Madison Holt.

It is mentioned at The 39 Clues website in Cahill Web that she and her siblings attend(ed) Thompson Falls Middle School, at which they have been branded a menace, and have instigated PTA meetings with the Holt twins as the sole subject (for excessive violence while playing soccer), and put three new P.E. Courses on the school curriculum (Kickboxing is specified in Reagan's case).

A news paper article is shown of Reagan having stolen her neighbors' dogs in an attempt to mimick an Iditarod [1].

On The 39 Clues website, a made up social networking site called 'CliqueMe' showcases the characters individually. Many of the main characters have profiles on this 'site'. Here is the information on Reagan's profile [2] contains:

Favorite Music: The Jonas Brothers (even though I could beat them up), Natasha Bedingfield, Carrie Underwood.

Favorite Quotes: "Reagan, you are definitely the smarter and prettier twin." -Madison Holt.

About Me: I'm going to climb Mount Everest one day.

Today: Reagan wishes her dad wouldn't blow his whistle so close to her ears.

The comments on her page include:

She has also left comments on her sibling's pages, 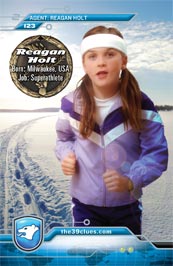