The 39 Clues Wiki
Register
Don't have an account?
Sign In
Advertisement
in: Characters, Holt Family, Mothers,
and 6 more

The Black Book of Buried Secrets
Mary-Todd Holt is the wife of Eisenhower Holt and the mother of Hamilton, Reagan and Madison Holt. She is a member of the Tomas branch.

Mary-Todd Holt was born in Dayton, USA to two inactive Tomas agents. She never knew that she belonged to the Cahill family. One day, Eisenhower Holt spotted her in a fitness competition, and he fell in love with her. She got married to him and joined the clue hunt. Mary-Todd always puts her family first.

Like the rest of her family, she has the looks of a body builder, with a thick neck, meaty hands, and a face that looks like a G.I. Joe action figure. In The Maze of Bones, Dan Cahill says that she even looks like she should be shaving and chewing on a cigar. She is shown to care greatly about her family.

She first appears in this book as the Holt mother. She, Eisenhower, and the kids accept the challenge and start working. The Holts then burn Grace's mansion and explode the Starlings. Then they try to bury Dan and Amy alive but are attacked by thugs. The Holts later attack Irina and Alistair, but the police come.

She appears briefly in this book. She is only seen in surfing, then battling with Shep's friends.

It was revealed that she was there with Eisenhower at the fire that killed Amy and Dan's parents, Hope and Arthur. She made a brief alliance with Alistair to get Dan and Amy.

Mary-Todd Holt has a cooking webpage on how to make protein shakes.

Mary-Todd's main card is Card 238. It is mentioned she is the bodybuilder of the month. 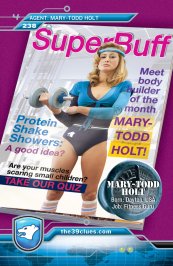