The 39 Clues Wiki
Register
Don't have an account?
Sign In
Advertisement
in: The Clue Hunt, Cahills vs. Vespers, Females,
and 6 more

Madison Holt is a Tomas operative who participated in the Clue Hunt.

Madison Holt lives in Milwaukee, Wisconsin with her family. She is the daughter of Eisenhower and Mary-Todd Holt, the younger sister of Hamilton Holt, and the twin sister of Reagan Holt. She also has a like for moose as seen in The Black Book of Buried Secrets. Madison Holt is the least mentioned character in the Holt family.

Madison Holt is 11 in Series 1 and 13 in Series 2, like her enemy Dan Cahill. She lives in Milwaukee with her twin sister Reagan, older brother Hamilton, mom Mary-Todd, and retired military soldier father, Eisenhower Holt. Madison, Reagan, and Hamilton all do sports.

Madison looks like her identical twin sister Reagan, except she has blonde hair and Reagan has brown hair. She loves bullying kids and is one of the toughest bullies in her school, alongside Reagan and Hamilton. Like the rest of the Tomas branch, Madison is athletic and strong, although not very smart. She sends a letter to West Point Academy about how she wants to join the school, after her dad got expelled for showing firearms to his dad without permission.

Madison is first seen when she and her sister Reagan are holding Dan upside down for fun and drop him on his head at Grace's funeral. Later, her and her family are some of the few people who are invited to see Grace's will. Madison and her family join the Clue Hunt. They end up setting Grace's mansion on fire while Amy, Dan, Saladin, and Alistair are still in it. The Holts also set off a bomb intended for Amy and Dan at the Franklin Institute in Boston that hospitalized and decommissioned the Starling triplets. Madison and her family are later seen in Paris, France at the chapel, trying to get the next clue, but escape when the police arrive.

She is seen with her family in the on the train.

Her family made an alliance with Amy and Dan to get the Clue Amber in Russia. Both teams searched the cities from the list NRR gave Dan and Amy. At the end of the book, their alliance is over. However, on multiple occasions afterward, Madison's older brother, Hamilton, helps Amy and Dan.

She and her family chased Amy and Dan while surfing.

Madison did not go with her family up Mt. Everest because she has high altitude sickness. Her father, however, is the only one who continued up the slope.

Madison goes down the cliff with Mary-Todd and Reagan to "hold off their enemies", leaving Hamilton and Eisenhower to "claim the prize" at the top of the cliff.

Madison does not appear in Series Two, Cahills vs Vespers, probably because her family is keeping her close after Reagan was kidnapped.

It is mentioned by Ian that she is training for the Olympics along with Reagan Holt.

She appears online in one part of Mission 8 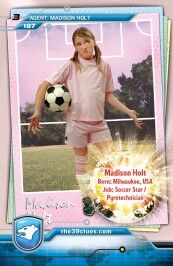 Madison has a CliqueMe page.

Her teacher posted a report that Madison wrote.

The Life and Times of Annie Oakley By: Madison Holt

Annie Oakley was a famous sharpshooter. That meant she could hit any target. She was the star of Buffalo Bill’s Wild West Show and liked to shoot on horseback. I’m related to Annie Oakley so I wanted my research to be good. I don’t have a horse so I borrowed my neighbor’s dog, Frederick. I wanted to ride him and practice shooting my water gun, but Mrs.Carson called the police. She’s so stupid. Frederick liked playing horsie. He only bit me three times while I was putting on the saddle! Can I get extra credit for all this research? Annie Oakley was such a good sharpshooter that her family sent her to Germany to assassinate the crown prince. He was a troublemaker and they wanted to get rid of him. But Annie totally wimped out and wouldn’t do it. I wouldn’t have wimped out. I’m not afraid of anything! Except asparagus. I had this nightmare where a giant asparagus tried to eat me. But I punched it in the face. The end.