The 39 Clues Wiki
Register
Don't have an account?
Sign In
Advertisement
in: Ekaterina characters, Oh Family, Deceased characters,
and 4 more

Gordon Oh was Alistair Oh's father. While on a business trip, he was killed by an assassin hired by his twin brother, Bae Oh.

He was the Ekaterina Branch leader up until his brutal death. Bae Oh, his twin, sent an assasin to intercept him as he rode across town. Afterwards, his wife (Lin Kim Oh) was sent to a hospital, overcome with grief, almost to the point of insanity. As he laid there bleeding from fatal wounds he managed to say 3 words to his wife before he slipped out of consciousness.

He was not described, but can be inferred to be like the looks of Bae and Alistair Oh. He is the opposite of his twin brother, Bae Oh. He was hard-working, intellectual, and he cared a great deal about his son, Alistair.

He does not appear in any of the books but is mentioned quite often.

It is said that it was a good thing when he was branch leader of the Ekats, and everyone respected him, making sense that he had leadership skills.

He does not appear online. 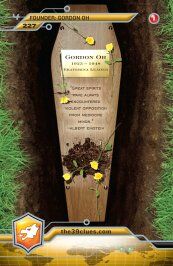