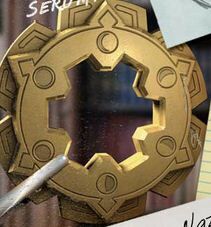 The Gold Ring is a cherished Cahill family heirloom. It was given to Gideon Cahill from his father. It was then given to Madeleine Cahill from Olivia Cahill to protect it. Grace was the last Madrigal to protect it before Amy. Its importance was unknown until the release of Trust No One. When connected with the machina fini mundi, it is what allows the machine to target subduction zones. In The Black Book of Buried Secrets, a code on page 31 reads, if cracked, 'protect golden ring.' On page 39 in the same book, it says, 'Keep Gideon's gold ring safe.' The back of the first cards in every Cahills vs Vespers book arranged in order forms a detailed diagram of the ring. In Day of Doom, the ring was taken from Amy and went into the Vesper's hands. When Gideon's ring was inserted into the device, it melts when the machine backfires. The ring was gone forever.