The 39 Clues Wiki
Register
Don't have an account?
Sign In
Advertisement
in: Ekaterina, Organizations, Branches of the Cahill family

The Ekaterina Branch is one of the five branches of the Cahill family. They are more commonly known as Ekats. The Ekaterina was named after and founded by Katherine Cahill, the second child of Gideon and Olivia Cahill.

The Ekaterina Branch was founded by Katherine Cahill. Although the branch is rivals with all other branches, its main enemy is the Tomas Branch because Katherine stole a Clue from her brother Thomas, the Tomas' founder. Because of this, Thomas swore to take revenge on her.

Katherine moved to Egypt with her stolen Clue, later becoming one of the world's first Egyptologists.

The Ekaterina's mascot is the Dragon. The dragon appears in countless forms, thus representing the Ekat's creativity, intelligence, and inventiveness, as well as their willingness to destroy anyone or anything in their path. 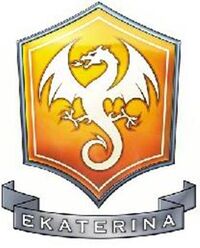 The Ekaterina crest is a shield in the shape of a square with jutted or gradually-pointed tips at the top and bottom of the shield. The crest and official color is yellow/orange. In the

center of the crest is a white wyvern, a type of dragon with two legs, two wings, and a curled and barbed tail. The Dragon is left-facing head breathing fire, and is shown to be in flight. The much simpler crest is the same, except only the head of the dragon is shown. As with all of the other Cahill family crests, there is a scroll at the bottom that reads: "EKATERINA".

Ekaterinas are known to be clever and inventive. The most famous scientists and inventors have been Ekats. Ekaterinas excel in engineering, mathematics, patterns, and sciences. They also learn skills quickly. Generally speaking, Ekaterinas are known as the most intelligent of the four Cahill branches, with a brilliant and creative mind. Though not as dangerous as the Lucians, the Ekaterinas, like all branches, have been known to commit murder; Ekaterinas killed the Lucian super-spy Sidney George Reilly. The Ekats seems to think of how their founder would react to their actions more than the other branches, always saying things like "Katherine would be proud" or "It's time to make Katherine proud."

Members of the Ekaterina Branch

Online on the 39 Clues Website, there are 7 ranks in this branch, according to priority: Lab, Engineer, Inventor, Gamma, Quantum, Atomic and Supernova Agent. You can ascend on the rank by collecting cards and clues, finishing missions and earning more points in Arena 39 to let the Prestige Meter go up.

The known Ekaterina strongholds are located in: