The 39 Clues Wiki
Register
Don't have an account?
Sign In
Advertisement
in: Females, Mothers, Leaders,
and 5 more

The Black Book of Buried Secrets
Cora Wizard is the leader of the Janus Branch. She is power hungry and wants to get what she wants, which is the 39 Clues, by any means necessary. Dan and Amy dislike her tremendously after they realize she bugged their house with a surviellance bug to keep tabs on the The Trent Family , to add to that, Amy and Dan think that if Isabel Kabra didn't kill Amy and Dan's parents, Cora Wizard would have instead.

Jonah Wizard thinks about his mother briefly and mentions that she has a lot of connections in every field of art and how that "didn't hurt him" in became a global megastar.

There is a letter to all Janus agents from her at the end of the book.

Cora Wizard makes her first appearance. She is seen telling Dan Cahill that he is a Janus. However, Dan shouts back at Cora saying that he was a Madrigal, and then storms away to a café. In the end of the book, she slaps Jonah because he requested to quit the Clue hunt. In this book she is said to have put a bug in Dan and Amy's old house on a statue that she "donated" to their parents.

It was revealed that she didn't talk to Jonah at all after the Clue hunt and she in fact disowned him, but Broderick took a stand and chose his son, not his wife, perhaps because she looked upon him as an employee and not as a real person. She also stands for Jonah in court against Isabel becasue "No one is allowed to touch Jonah but herself".

In the First Series Books,Cora is described as having a "hippie-like" appearance. She has long hair and wears flowery clothes and bell-bottom jeans. She has chocolate-colored eyes and dark hair.

Cora, as leader of the Janus Branch, is highly skilled in the arts, and is the youngest person to ever win a Nobel Prize. Her son, Jonah, is an international superstar. Though not as vicious as Isabel Kabra, Cora is definitely cunning and willing to do whatever it takes to get her way. This is proven when in The Black Book of Buried Secrets, it is revealed that there were three branch leaders, but Cora bribed one into retirement and leaked false documents in order for the other to resign in disgrace. This was so she could have sole control over the branch. She has been seen hitting Jonah occasionally and she likely cares more about the 39 clues than Jonah. Jonah is shown to be afraid of her, but still wants to please her and make her proud.

Cora Wizard is a talented artist. She is the youngest person to win a Nobel Prize in Literature. She also wrote several books and made several sculptures. She's very cunning and deceptive like most Cahills. 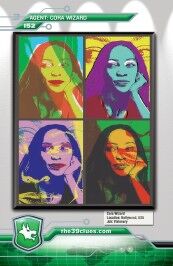