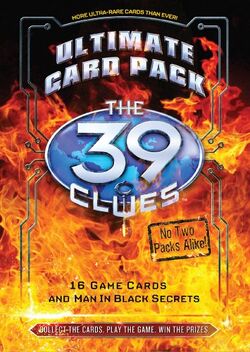 Card Pack 4: End Game (also known as Card Pack 4: Ultimate Card Pack) is the fourth card pack. It is for books 9 and 10, Storm Warning and Into the Gauntlet. It has 16 cards per pack.

A pack has 16 cards out of the 34 available for this Card Pack. Cards are placed in the pack at random, and it is possible to get multiple copies of one card. Some cards are very rare, while others are quite common. There are NO common cards. They only go down to uncommon. An Ultimate Replicator is also included, when redeemed online it will give you 10 Replicators.

The doctors tell me these are my last days. My plans are laid and cannot be changed. But the odds of success are slim. I lost my daughter to this wretched business. And I shiver when I think of the dreadful legacy I pass down to Amy and Dan.