The 39 Clues Wiki
Register
Don't have an account?
Sign In
Advertisement
in: Cards, Agent Cards, Common Cards,
and 6 more

"Alistair Oh entered Harvard University at the age 18 and was expelled at the age of 20, because he somehow managed to place the Dean of the Disciplinary Committee's convertible on the university's roof, though the Dean of the School of Engineering was most impressed. After this disgrace, Alistair turned to his cousin Grace Cahill, who took Alistair under her roof. He was rather enamored with her toddler,  Hope, which made what happened later "that much more....regrettable", according to Alistair.

A letter Alistair wrote to Grace when he was a young boy. It shows that he was living with his uncle , Bae Oh at the time, and that he feared and disliked him. 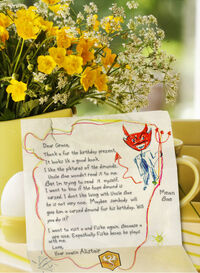