The 39 Clues Wiki
Register
Don't have an account?
Sign In
Advertisement
in: Article stubs, Characters, Tomas characters,
and 4 more

Buchanan Holt was the rising star of the Tomas branch. He was a great athlete and a skilled Clue hunter. But Arthur Trent purposely falsely reported him and told the Tomas that he was a spy for the Ekats, and they claimed he was a traitor. He raised his only son, Eisenhower, all by himself, due to his wife dying from an unknown cause. He was obsessed with turning Eisenhower into a top agent and Clue hunter because he wanted to make sure his son would not suffer the same fate he did.

Buchanan does not appear online. 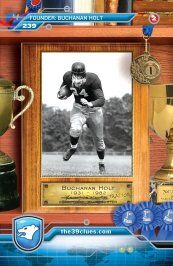