Flashpoint
Broderick T. Wizard is Jonah Wizard's non-Cahill father and Cora Wizard's, the leader of the Janus Branch, husband. He is strongly suspected to be a Vesper, partly because of his card, and partly because of the 4th card booklet in the card packs, when Grace reveals a suspicion to Fiske that he may be a Vesper, and also partly because of his middle name. All we know about it is it starts with a T. He was probably the only non-Cahill at Grace's funeral besides Astrid Rosenbloom and the Vesper disguised as Cousin Ingrid. He was a suspect for Vesper Five, but was proven not to be. He always carries his Blackberry around. He is also excels at acoustic guitar as said in the Emperor's code

In highschool and part of college Mr. Wizard was called the 'rising star' because he had an amazing talent at the guitar. But he stopped whe he met Cora Wizard because he remarked that he could "never be one of them (Janus)." Mr. Wizard is almost never seen without his Blackberry (except in The Emperor's Code, when inside the Shaolin Temple, Broderick's Blackberry was taken by one of the monks there because the monk thought it was a camera) and he is never seen without his son right beside him. This is an exception in One False Note, when Jonah is being interviewed by the media, and Broderick goes and steals Nannerl's diary for Jonah. He also acts like Jonah's personal secretary. He married into the Cahill Family like Arthur Trent, the father of Amy and Dan.

He is a tall, African American bald man in his late 30's, approximately.

Broderick loves his son, Jonah, more than his wife, Cora. It is shown in The Black Book of Buried Secrets when Cora stopped speaking to Jonah, Broderick chose his son over his wife. He even made a song with Jonah about how much he loves him.

Shortly after Grace Cahill's Will is read, Broderick asks William McIntyre if he can record the search. When Mr. McIntyre refuses his request, he offers a portion of profits. Mr. McIntyre again refuses, and tries to make Broderick understand the importance of the hunt. Broderick appears near the end, when Amy Cahill threatens to break the vial containing the Lucian Serum unless Broderick and Jonah stand near the painting of Jane Cahill, and they do what they are told.

He and his son both are trying to chase Amy and Dan in the water canals of Venice. Before that, during a press conference, Broderick is missing, because he is busy stealing Nannerl's diary.

He is watching as Jonah pushes the Cahill children on a crocodile-infested island in the Nile.

In this book, Broderick and Jonah kidnap Dan so he can help them in the Clue hunt. It is revealed that he can play classical music on a guitar very well, but Broderick feels that it's nothing compared to the great classical musicians and composers of the Janus branch (Dan disagrees, thinking that he is fantastic). His Blackberry is confiscated by the people of the Shaolin Temple, because photography is forbidden, and the people seem to think the phone is a camera of some sort. Broderick is angered at this, but his phone is returned later.

Broderick firstly appears telling Jonah he has an appointment with Miss Pluderbottom (Getrude Pluderbottom). Later is seen at the end of the book singing the first song Jonah and him made together, when he was tied to a gravestone by Isabel Kabra.

Broderick makes a brief appearance alongside Jonah Wizard in Guatemala.

Broderick Wizard never appears online, although he is mentioned several times. He was one of the suspects for Vesper Five: The Spymaster. However, this has been disproven, as Luna Amato was Vesper Five. 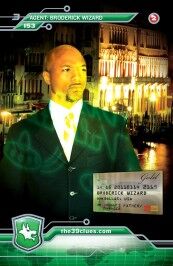 Retrieved from "https://39clues.fandom.com/wiki/Broderick_Wizard?oldid=121795"
Community content is available under CC-BY-SA unless otherwise noted.