The 39 Clues Wiki
Register
Don't have an account?
Sign In
Advertisement
in: The Clue Hunt, Ekaterina characters, Oh Family,
and 4 more

Bae Oh (오배) is Alistair Oh's uncle and was the former leader of the Ekaterina Branch. He is currently in prison in The Hague, Netherlands for various offences, which are listed in a rather comical way in The Black Book of Buried Secrets. He is known as a cheap and lying businessman. It is revealed that he made several alliances with the Lucian Branch when he saw the Trent Family as a growing threat. He also murdered his brother Gordon to become the Ekat leader.

Bae Oh was the son Henry Cahill, a Lucian who converted to a Madrigal, and his second wife, Hae-In Oh. Henry was first married to Flora Cahill St. James. She was killed by the Lucian leaders who weren't happy with the converting. This made Bae and his twin brother Gordon Oh, the stepbrothers of James Cahill. As he was 87 in the first series, and the first series took place in 2008, Bae and his brother were born in 1921.

Bae Oh always lived in his twin brother's shadow. Bae was always lazy and did not take his missions seriously, unlike Gordon Oh, his brother. When Gordon was made head of the Ekaterina branch, Bae was outraged. He then hired an assassin to kill Gordon. Alistair Oh finds a yellow paper that says to "get rid of" Gordon immediately and shows information about his assassination.

After Bae ordered a assassination on Gordon, he took Gordon's son, Alistair Oh, under his wing, but treated him badly and often scolded him. He was then the leader of the Ekaterina Branch.

In The Viper's Nest, Bae was confronted by Alistair regarding the death of Gordon Oh. Bae denied any involvement in Gordon's death, but Alistair escaped after tricking and pepper-spraying Bae.

He is now in captivity in The Hague, awaiting trial for murdering Gordon Oh, extortion, and arms dealing. And the assault and battery of Alistair Oh according to The Black Book of Buried Secrets. It also says that he started a rumor that Ivan Kleister needs a Post-It Note to remember what each button does on the remote, indicating a belief in Ekaterina intellectual superiority over their rivals, the Tomas branch.

Bae Oh, being the leader of the Ekaterina Branch, is brilliant but extremely deadly. He is very sophisticated, but not hesitant to murder. He is also very deceiving, and has no respect for family, just Clues and power.

Alistair Oh sees him in an alley. Later, after being abandoned by the Kabras and trying to leave the cave, Alistair fakes his death in order to play a speaking role until the end of the book to hunt down his uncle, Bae Oh. It is revealed he has contact to The Man in Black (Fiske Cahill).

Bae trapped Amy and Dan in a gigantic plastic cube in the Ekat stronghold. He started questioning them about Alistair's death. When they refused to talk he left to wait for them to say the truth or die of asphyxiation. While waiting for Dan and Amy to burst, Nellie and Saladin freed them, leaving Bae outraged and wanting his revenge.

Bae captured Alistair in a police car. While held hostage, Alistair asks about the death of his father, Gordon Oh. Alistair then faked his own death again for Bae, pretending to be having a heart attack. Then he knocked the police officers out. He used Bae's cane to release pepper spray and paralyze Bae. Alistair then walked away singing the song "Marching to Peoria".

He is arrested for "the murder of Gordon Oh, for passing on illegal weapons, for the transport of hazardous materials - and for assault and battery. He was most likely replaced by Alistair Oh as Ekaterina branch leader, due to the fact Alistair was next in line for the title. Bae Oh then went to Hague to awaite trial for his crimes. 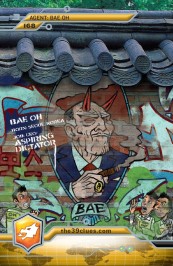