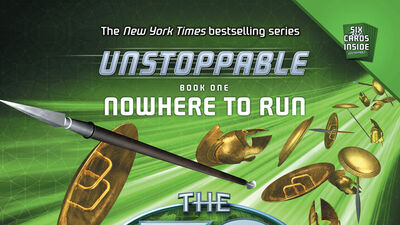 Nowhere to Run is the first book in Unstoppable, the third 39 Clues arc. It was written by Jude Watson. The book was released on October 1, 2013 and comes with cards 467-472. Nowhere to Run Sneak Peek runs started from the prologue to Chapter Four. You can only read the excerpt if you have...

i cant believe alistair died and he didn't even get murdered. He was by far my favorite character.
(edited by Total MLG pro)
Nowhere To Run

SPOILERS FOR DAY OF DOOM!

Well after we had the PERFECT sequel to the original series in the form of the 5-book Cahills Vs Vespers series (That book by Linda Sue Park didn't happen. Just forget about it and pretend it never existed and it will fade away) We now move into the 3rd Arc of the 39 Clues. Unstoppable is a 4 book series with the first book written by Jude Watson.  Coming off the Cahills Vs Vespers series which was a massive financial sucess as well as being well recieved by fans. The 3rd series will have to offer a different reading experience as well as be completely different from Cahills Vs Vespers while keeping what we liked about that series. Following me so far? if not then hit CTRL+F4 and things will get clearer.

What we need to see in Unstoppable

A new type of villain. The 39 Clues villains seem to be following a pattern. The first series villain (Isabel) was very much a Tomas style villain. She worked on the battlefield and had to be beaten on the battlefield. What made her tough was her physical power (and weapons). Vesper One was a Lucian villain through and through. Couple that with the blue and red backgrounds the covers of their series had respectively and you see a connection. I have a feeling that this Villain (Rutherford J Pierce) will be a Janus style villain. A villain who is skilled at what he does, is all about the process and not the reward, and requires careful planning to beat. (Not like brute force for Isabel and dumb luck for V1). This type of villain is very close to a Loki or Joker kind of villain. THIS is the kind of villain we need to see as he is vastly different from the other two we have seen yet still interesting.

A good story. The thing that kept Cahills Vs Vespers and even the first series so amazing is that they understand what type of book they are and excute their stories perfectly. A book like The Hunger Games is all about the characters and the changes they are enduring to their personalities and minds (No one can say that the Katniss at the beginning of The Hunger Games was the same Katniss at the end of Mockingjay). The 39 Clues is a book series that focuses on the story of the characters and the world around them. Harry Potter is the greatest example of this. We need a good well told (And well written) story to keep this series good and interesting.

A different story: This is key. The first series told an adventure story of good people thrown into a competition of dirty players. The second series is a tale of endurance as our protagonists fight through blow after blow thrown at them by a seemingly unstoppable enemy. A completely new tale is needed. I am very worried here because it often happens that the 3rd installment in a series trys to be an exact replica of the 2nd series and fails miserably (See Spider-Man 3 for more details) or trys to be something new and goes completely wrong (Mockingjay anyone?) instead of being something new and original and doing it right (The Dark Knight Rises and Warriors: The Power of Three are perfect examples)

Good Writers: In the second series 3 books were written by old Authors who we trust and know they can do well from the first series. And two authors who have outshined ALL the other writers to write the two best 39 Clues books (Shatterproof and Day of Doom). I am mentioning this because the two new authors of this series have no track record of good books (Frankly they don't even have wikipedia pages so that is disturbing) I do hope to god that they can write because otherwise.... Half this series will suck.

Keeping control of the series AWAY from the authors: What I mean by this is someone like Rick Riordan writes up the overall story and its the authors job to put it into books like they did for the first AND second series. From what I am hearing each author has full control over what happens in their book. Coupled with my worries about the 2 new  authors... Well this may not bode well.

As this is a new series I almost no expectations whatsoever. This is a fresh start and a new look at the world we have come to know and love. Feel free to disagree in the comments.

All I DON"T WANT to see is Dan getting some love interest. I hate the way they make romance in books nowadays; It's made for the 13-16 year old girls who were ready to kill over the @##$@#Q ###!#$%#$@!@#Q##!!@@  Twilight movies/books and voting team expresionless vampire and team child attracted puppy with a million abs.(I have been waiting to get that out for a while. I expect more than one twihard bashing on me and talking a load of crap about how good the Twighlight books are and how well acted the movies are.... I don't care so be quiet)